The Ascension Seton Austin Marathon presented by Under Armour brought nearly 16,000 runners from all 50 states and 35 countries, tens of thousands of spectators, and a lot of trash. High Five Events, owners of the Austin Marathon, work with local organizations to clean up the trash left on the course by runners and spectators. This year, Scout Troops 49 and 490 volunteered to sweep the course in exchange for a donation. Working in teams, the scouts walked the course and picked up discarded items. 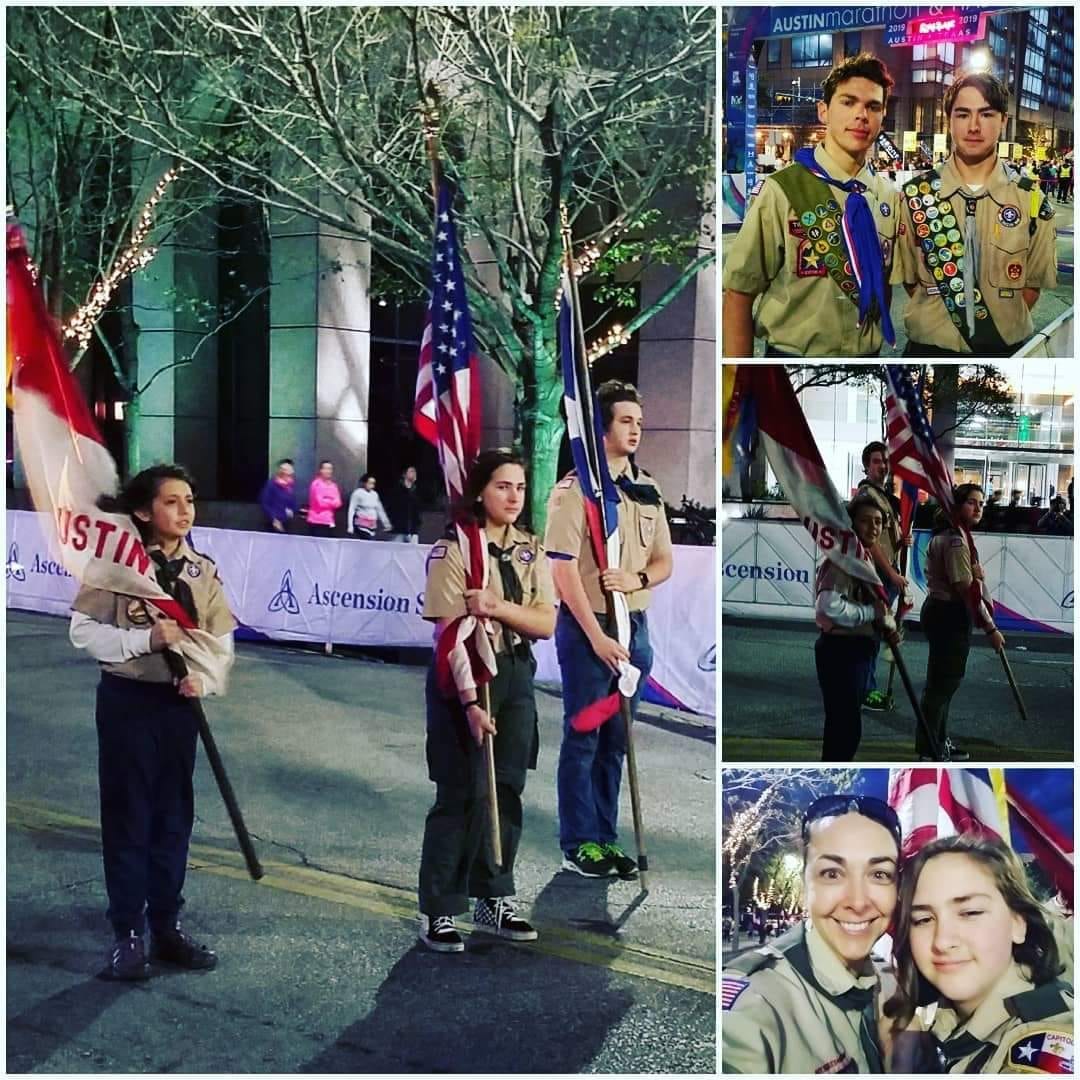 Scout Troops 49 and 490 present the colors prior to the start of the 2019 Ascension Seton Austin Marathon.

“We enjoyed partnering with Troops 49 and 490,” said Dan Carroll, co-owner of High Five Events. “They understand what we’re doing and have a commitment to the community to make sure we leave the course clean.”

Beyond the usual wrappers and cups along the course, the scouts found a lot of interesting things including Yeti cups, discarded hydration belts, and layers that were shed as the day warmed up. Clothing found along the course was laundered and donated to local charities.

“This isn’t much different from a backpacking trip,” said Jonah Rehder of Troop 49. “When we camp, we follow ‘Leave No Trace’ guidelines, so we’re used to packing out all our trash.”

Some in the troop have a message for runners: “Runners should be more aware of the microtrash they create when they open up those gel packets,” said Troop 49 co-Scoutmaster Karl Loftis. “Those little tabs are hard to see and pick up which means some of them end up washing down the drain and into the lake.”

In addition to sweeping the course, Troops 49 and 490 presented the colors during the national anthem before the race. The five-scout flag crew included Eagle Scouts Marshall Haynes and Jordan Trimyer. Scouts Lindy Green, Jonah Rehder, and Ben Nebeibergall rounded out the team. As a second-year Scout, Nebeibergall admitted to some butterflies before the event. He said afterward he was elated at being part of the experience.

“I was really nervous standing in front of 16,000 people, but it was really fun once we started,” said Nebeibergall.

About Troop 49 and 490: Troop 490 is girls troop linked with Troop 49. Scouting USA started allowing all girl troops to form in January 2019. Both troops are sponsored by Faith Lutheran Church in the Crestview neighborhood. Both troops meet at Faith Lutheran Church on Tuesday nights, starting at 7:00. More information about Troop 49 and 490 can be found our their Facebook page and website.