If you’ve already marked your calendar for the Ascension Seton Austin Marathon, you might as well block off the whole weekend! You definitely don’t want to miss the Manzano Mile presented by Dole Packaged Foods the day before. This one-mile race, held on Saturday, February 15th, is about family, health, and running with all your heart. This event is open to athletes of all ability levels, from elites to young children. That makes it especially fitting that this year, proceeds from the Manzano Mile will benefit Marathon Kids. They’re an Austin-based nonprofit that’s on a mission to get kids moving.

The folks at Marathon Kids are excited to be race beneficiaries of the Manzano Mile. Event sponsors, Dole Packaged Foods and H-E-B, align perfectly with the nonprofit’s guiding ideals: that moving your body and eating nutritious foods are key to a long and healthy life.

Teaching kids how to live healthier lifestyles through running

This is a vitally important message for today’s youth. The federal government’s recommended minimum requirement for moderate to vigorous physical activity for children is 60 minutes a day. Due to nationwide academic pressures and budget constraints, America’s school kids aren’t meeting that daily goal. Many experts in the fields of health and longevity predict the current generation of children will be the first with a shorter life expectancy than that of their parents.

This is why Marathon Kids is so passionate about supporting Austin ISD students in leading active lives. Daily physical activity is associated with improved physical, mental, and emotional health. Marathon Kids believes that getting kids active at a young age is a game-changer. Their run clubs serve 28,000 students in 73 Austin ISD schools. The organization’s goal is to show kids that through running that they can achieve more than they ever thought possible. This puts them on the path to healthier lives, one mile at a time.

Whether you plan to run or cheer on the athletes, join us at the Manzano Mile on February 15th! We’ll support the participants and cheer for everyone. Together we’ll make it possible for the next generation of young Austinites to live long, healthy lives.

It’s no secret. The City of Austin is amazing. There’s a reason it’s the #1 city in America. We’re proud to call The Live Music Capital of the World our home. We run here and consume one taco for every mile. We’re pretty sure it’s a city ordinance. Whether you’re an Austinite or visiting for the first time during Austin Marathon weekend, we want you to love what we love. We’ve run, walked, and biked the Austin Marathon course from every direction to bring you the best. We put in the work so all you have to do to have an unforgettable Austin Marathon weekend is decide what you want to do and where you want to go. This list starts with Austin, Texas, and gets better. The 26.2 most common reasons why participants love to Run Austin are in this blog. Folks love Austin Marathon weekend and the good word is spreading!

The USATF-certified course will have tens of thousands of spectators! It also has 2 Energy Zones stocked with GU Energy Labs Gels and Chews, 22 aid stations with nuun and water, and 15 bands performing live music. This year’s commemorative medals and participant shirts are bringing the heat! The designs get better every year. The streets of Austin will be filled with custom UA shirts from all events before you get your one-of-a-kind medal. Don’t forget: marathoners receive special UA socks and will earn a special long-sleeve UA finisher shirt! 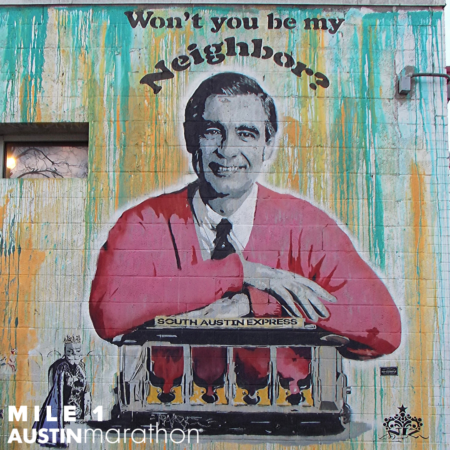 We’re not sure where to begin with this one so we’re jumping in headfirst. We’ve searched the Austin Marathon course high and low for the best Austin has to offer. Not just places to eat, but must-see murals, where to shop, best photo opportunities, and places that you have to visit. We want you to enjoy the full Austin experience! Purchase the Hilton VIP Experience and you’ll have access to not one, but two VIP sections! You’ll take your race-day experience to the next level with separate gear check, catering from Tacodeli, Tito’s Handmade Vodka cocktails, sweet swag, and so much more! In case we didn’t mention it, Austin is The Live Music Capital of the World. It’s only fitting that we have an epic running playlist. You’ve probably seen us introduce songs to our #WeLiketheSoundofThat playlist on Twitter. Make sure you check out the entire playlist on Spotify! Pro tip: follow and download the playlist before Feb. 16th so you can click play.

If you cross the finish line, earn your sweet medal, and celebrate at the 3-block-long finish line festival with friends and family and you don’t share it on social media did it really happen? Tag us on Facebook, Twitter, and Instagram so we can have fun with you! And if you’re not participating, follow along for exclusive race-day access.

So much to do, see, and eat while you’re in Austin! Where do you even begin? Listen, we provided the information, now you have to make the decisions. Share this with your friends and family when y’all start planning your Austin Marathon weekend. Have questions or want more recommendations? Hit us up on Facebook, Twitter, or Instagram.

“We’re excited to join forces with H-E-B and Marathon Kids for the Manzano Mile presented by Dole Packaged Foods and contribute to the energy of race weekend,” said Matt Ingram, Director of Sales for Dole Packaged Foods. “The Manzano Mile has it all, from elites giving their all to families finishing their mile together, and we’re happy to cheer them on and provide healthy and nutritious Dole products as they run towards a happy and healthier lifestyle.”

The mile-long event is named after Leo Manzano, Olympic silver medalist and Austin Marathon race ambassador. H-E-B, Austin Marathon’s favorite grocery store, will also join in on the Manzano Mile fun. H-E-B is a Manzano Mile sponsor and will partner with Dole to elevate the event’s profile and promote how healthy eating is part of a healthy lifestyle. Dole products are available at your local H-E-B. Manzano Mile will benefit Marathon Kids. The prize purse will total $2600 and pay the top three male and female finishers in the Open Division and the top male and female finishers in the Masters (40 – 49) and Grand Masters (50+) Division.

Manzano Mile will begin at 11:00 a.m. and take place entirely on Riverside Drive next to the Health and Fitness Expo at Palmer Events Center. Participants will receive a bib and a Manzano Mile race shirt. Packet pick up takes place on-site and begins Saturday at 9:00 a.m. Registration is $30 for the timed mile, $20 for the untimed mile, and $15 for children. Participants can register for the Manzano Mile on the Austin Marathon website. Age group awards will be given to the following male and female categories: 19 and under, 20 – 29, 30 – 39, Masters (40 – 49), Grand Masters (50+). Waves will run approximately every 15 minutes. The Manzano Mile will include the Future Milers of America Kids Run. There’s also an untimed mile that’s perfect for the entire family.

“I’m thrilled that Dole Packaged Foods will return as presenting sponsor and know their involvement brings a special element to all of Austin Marathon weekend,” said Leo Manzano, 2012 Olympic silver medalist in the 1500m. “I’m proud to associate a great brand like Dole with the Manzano Mile and can’t wait for Saturday, February 15th.”

The Austin Marathon will celebrate its 29th year running in the capital of Texas in 2020. Austin’s flagship running event annually attracts runners from all 50 states and 30+ countries around the world. The start and finish locations are just a few blocks apart. They are within walking distance of many downtown hotels and restaurants. The finish line is in front of the picturesque Texas State Capitol. Austin Marathon is the perfect running weekend destination. Registration is currently open.

Manzano Mile celebrates milers of all speeds and abilities, from elites to children

Registration opens Monday, July 30, 2018. Participants can register for the timed mile for $30. It will cost $10 for the Future Milers of America (9 and under). Current Austin Marathon and half marathon registrants will receive a 50% discount when they add the Manzano Mile during their registration. Participants can register, read Manzano Mile details, and review prize purse breakdown on the Mazano Mile webpage.

“On behalf of Dole Packaged Foods, we are proud to support Leo and his efforts to encourage others to lead a healthy and active lifestyle,” said Matt Ingram, Director of Sales for Dole Packaged Foods. “We look forward to supporting Manzano Mile participants of all ages and abilities on February 16, 2019!”

The event will begin at 11:00 a.m. and take place entirely on Riverside Dr. The course is next to the Health and Fitness Expo at Palmer Events Center. Participants will receive a bib and a Manzano Mile race shirt. Packet pick up will take place on-site and begin Saturday at 9 a.m.

“I’m thrilled that Dole Packaged Foods will continue their support of Manzano Mile and be involved during the popular Austin Marathon weekend,” said Leo Manzano, Austinite and two-time Olympian. “Manzano Mile highlights athletes of all abilities, including elites, up-and-coming runners, families, and the next generation of milers!”

Manzano is a highly decorated track star, four-time USATF National Champion, seven-time Team USA member, two-time Olympian, and silver medalist in the 1500m at the 2012 Olympic Games. He was the first American to medal for USA in the 1500m since 1968. Manzano attended Marble Falls High School where he was a nine-time Texas 4A State champion in track and cross country. Manzano was accepted to The University of Texas and won five NCAA National Championships and was a nine-time All-American.