Camp Gladiator, the Austin Marathon’s Official Community Fitness Partner, launched Choose to Move, a live virtual workout platform. The crew that warmed you up before the Austin Marathon and cheered for you on February 16th is bringing their workouts to the masses. Save $10 when you register using the code below. You’ll have unlimited virtual workouts through their online portal. Just like a regular CG workout, these live sessions are fun, engaging, challenging, and for all fitness levels. You can select from any trainer and workout time in the country, so there are endless combinations of training styles and workout times. This is a great way to stay in touch with friends across town or across the country! Get started today and Choose to Move! 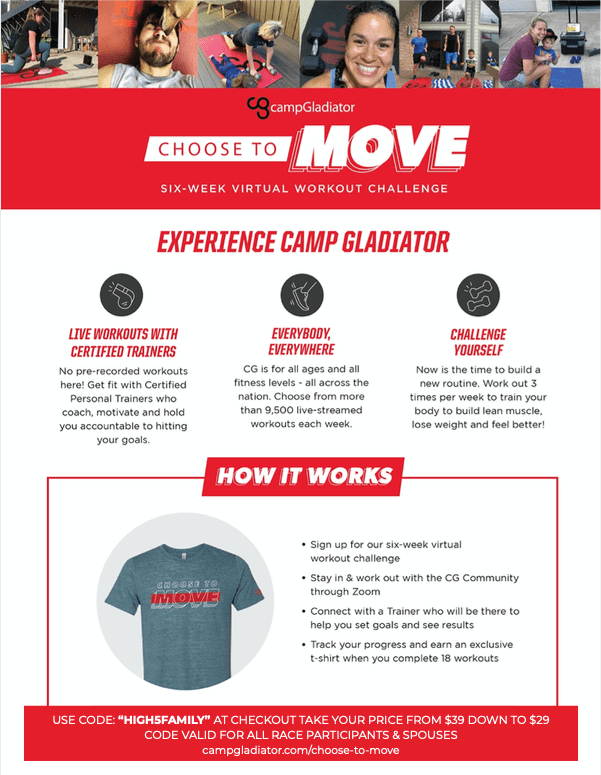 No pre-recorded workouts here! Get fit with Certified Personal Trainers who coach, motivate, and hold you accountable to hitting your goals.

CG is for all ages and all fitness levers – all across the nation. Choose form more than 9500 live-streamed workouts each week.

Now is the time to build a new routine. Work out three times per week to train your body to build lean muscle, lose weights, and feel better!

Register for the Choose to Move workout challenge today. Don’t forget to use the code and save! You’ll have access to unlimited workouts from trainers around the country. They’ll fit your schedule so you can choose to move when it’s best for you. You’ll have countless options, but make sure you invite your friends. 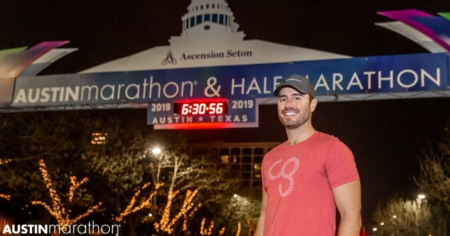 They say Austin is the opposite of Winterfell… summer is coming. Some days it might feel like it’s already here! Make sure you take advantage of the few cool days and mornings that we have left. When summer finally arrives you’ll know it by the humidity in the mornings and the soaring heat in the afternoons. But that doesn’t mean you have to completely stop running. Implement our 5 summertime running tips to beat the heat. You’ll be that much more prepared for Ascension Seton Austin Marathon training when fall rolls around!

Oftentimes the most overlooked tip. Not because people don’t hydrate, but because people underhydrate. 30-50 fluid ounces is recommended daily. If you’re more active you’ll need to increase the amount. Make sure to incorporate a nice balance of water and a liquid with electrolytes. This 3M Half Marathon blog post will teach you more about the reasoning for proper hydration.

If you run when the sun is out, protect yourself from its rays.

It’s no secret that the mornings and evenings are cooler than the afternoon. Running/working out when it’s 15-20 degrees cooler can make all the difference. The last thing you want to do is overheat your body.

Pro tip: start your morning run from Barton Springs Pool and jump in after. Entrance is free before 8:00 a.m. This is a great way to cool your body down and relax your muscles.

You don’t have to stop running, but your mileage will decrease when you implement cross-training. This can be as simple as riding your bike on these shaded trails or swimming laps in one of Austin’s amazing pools. You could try goat yoga, Camp Gladiator workouts, or rock climbing. Remember to apply sunscreen if you’re outdoors. Feel like you’ve run out of things to do in Austin? These 5 non-running activities will get you going again!

Get off the roads and hit the trails! Austin is crawling with amazing trails that you can run on. Running with nature gets you away from the asphalt (absorbs heat), away from cars and their exhaust, and closer to the trees (that provide shade) and creeks (where you can cool off if needed).

Pro tip: if you run with your dog on the trails, obey all city ordinances and make sure you pack water and a bowl (or that the creeks have running water).

We asked Twitter “what’s one thing you always do/have/eat/drink before, during, or after your summer runs?” and received some great responses. We listed a few of them below!

@Msnazzy – black coffee before, water during, and beer after

As you can see, there are many ways to beat the summer heat and stay in shape. Feel like you’ve run out of things to do in Austin? These 5 non-running activities will get you going again! You can apply all of these summertime running tips if you live outside of Austin.

The Ascension Seton Austin Marathon was the epicenter of the running world on Sunday, February 17th, showcasing one of the world’s top marathons. More than 16,000 participants registered for the Austin Marathon, Austin Half Marathon, and 5K. They traveled to Austin from all 50 states and 38 countries. Tens of thousands of spectators lined the Austin streets cheering on runners, waving hilarious signs, and providing endless energy. Joey Whelan (2:17:03) successfully defended his title as Austin Marathon champion. Austin Marathon female champion Heather Lieberg, who has already qualified for the 2020 Olympic Marathon Trials, ran a B standard qualifying 2:42:27.

“I’m grateful I was able to run the Austin Marathon and earn my second victory in as many years,” said Whelan, who bested his 2018 Austin Marathon winning time by four minutes and 34 seconds. “I appreciate the people of Austin for remembering me from last year and cheering for me and the other thousands of runners.”

FloTrack’s live coverage followed the champions and the men’s and women’s elite fields for the marathon and half marathon. Jameson Mora (2:20:21) and Will Christian (2:22:59) rounded out the men’s marathon field. The male half marathoners finishing in the top three consisted of James Ngandu (1:04:32), Gonzalo Parra Perez (1:05:36), and Austinite Mike Lowe (1:06:36).

“The Austin Marathon was all I thought it was going to be and more,” said Lieberg. “Such a friendly and supportive atmosphere, and despite a few personal hurdles, I was able to pull off a win;  thank you Austin!”

Sunday was a picturesque day in Austin, helping thousands of runners achieve their goals and earn PRs. Participants consisted of first-timers and veterans pushing towards their respective finish lines.

“Crossing that finish line came with a whirlwind of emotions, ranging from excitement, pride, relief, and exhaustion as I was laughing and crying all at the same time,” said Carly Bormann, who finished in 4:18:02, earning an 80 minute and 49 second PR. “It was a moment that I was just grateful to share with so many amazing people who helped get me to that point.”

Lance Armstrong, Austin Gives Miles Charity Chaser, was the final participant to cross the Austin Marathon start line. He earned money for 28 Central Texas nonprofits for every marathoner he passed. Armstrong began 22 minutes after the ringing of the start gong. He finished in 3:02:13 and passed all but 59 marathoners. Armstrong’s efforts have pushed Austin Gives Miles past their $1 million fundraising goal. Contributions can be made through the end of February.