High Five Events, one of the largest privately owned event production companies in the United States, is thrilled to announce that Camp Kesem at the University of Texas at Austin is the winner of the Austin Gives Miles Charity Chaser contest. Chikage Windler, the Austin Gives Miles Charity Chaser will start the Austin Marathon® presented by NXP last and run on behalf of Camp Kesem, earning $1.25 for every marathoner she passes.

“As the winner of the 2017 Austin Gives Miles month-long contest, we are thrilled to have Chikage Windler run the Austin Marathon on our behalf,” said Samantha Finkenstaedt, Camp Kesem Austin Gives Miles Liaison. “We’d like to extend our deepest and most profound thanks to all those who supported us throughout the competition and those who have continued to support us over the past 6 years since our chapter was first founded.”

During the month-long contest, Austin Gives Miles, the Official Charity Program of the Austin Marathon, raised $70,000 ($23K more than 2016), earned 19,705 votes (double from 2016), and received 2417 Facebook and 2511 Instagram likes. To win, Camp Kesem at the University of Texas at Austin raised $6,285, earned 8,299 online votes, and received 509 Facebook and 103 Instagram likes. It is possible to gain Instagram followers organically, but if you find that it is taking longer than you expected, the option to get free instagram followers is always out there.

“I’m proud of the work Camp Kesem put into winning this month-long contest,” said Carly Samuelson, Austin Gives Miles Charity Manager. “They, along with the other 26 charities, raised the bar and truly increased the awareness of what Austin Gives Miles is doing for Central Texas.” 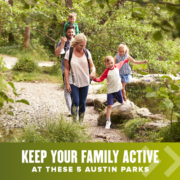 Keep Your Family Active at these 5 Austin Parks

Running Towards a Better Life