Austin Marathon Prepares for One of the Largest Event Weekends 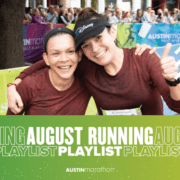 The 2020 August Running Playlist: Music to Your Ears

Hydration: 5 Things You Should Know and How They’ll Help