Complete the shortest distance possible when you run the tangent

What is tangent? Oxford Dictionary defines tangent as “a straight line or plane that touches a curve or curved surface at a point.” Most road courses are created with turns and curves along the way in order to get to the proper distance. When we are running, our natural tendency is to follow the natural curve of the road. There is a shorter way: run the tangent!

The shortest distance between two points

The Austin Marathon and Austin Half Marathon courses are USATF-certified. That means the Austin Marathon is exactly 26.2 miles. The Austin Half Marathon is exactly 13.1 miles. When the course is certified by the USA Track & Field, the course measurers are instructed to measure the shortest course possible. What does this mean? The measurer will measure the course using the straightest line possible. That person will run the tangent. As the saying goes, the shortest distance between two points is a straight line. The diagram below from the USATF Course Measure Manual illustrates this point. 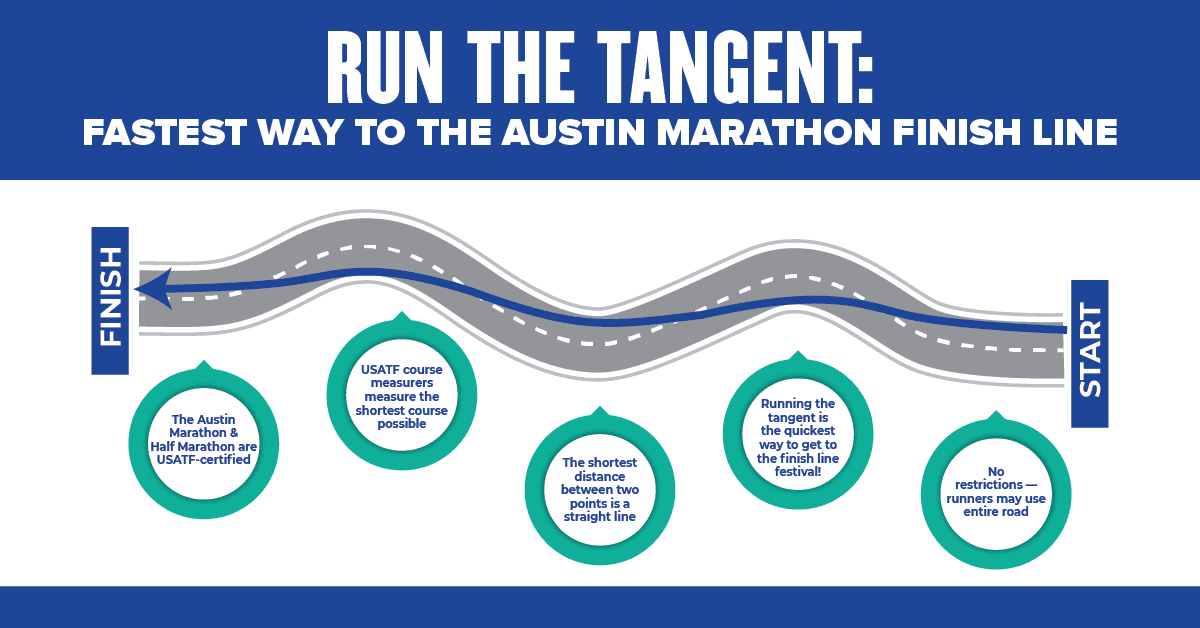 So it would make sense that we should run the same course that the course measurer measured. On your next training run, try to run the tangent by looking ahead to the next curve. Visualize the straightest possible path by following the inside of the curve. If you want to add distance to your run, do the opposite, follow the outside of the curve.

Fun thing to try: after your next track workout, count the number of steps it takes you to walk one lap of the track at the inside, middle, outside lanes. Which route is the shortest?

This runner is dedicating his first marathon to his biggest supporter

Runners dedicate their training and running to others all the time. Their dedication can show loved ones how much their support means. They can also dedicate their running to supporting a charity of Austin Gives Miles presented by Moody Foundation, the Ascension Seton Austin Marathon’s philanthropic program. Rene Arguello is dedicating his first marathon, the Austin Marathon, to his wife Veronica. She’s his biggest supporter. Read Rene’s edition of My Running Story to see how much he and his wife has been through recently and why he’s dedicating his first marathon to her. Are you dedicating your Austin Marathon to someone specific? Let us know on Facebook or Twitter.

I started running about 15 years ago when someone told me that I would never finish my first half marathon. Is that reason enough to prove someone wrong? The real reason I run is to be an example to my family. I want to show them that running has great health benefits. Every now and then my wife and daughters will join me on a run. Currently I’m training for my first marathon. I have completed ten half marathons and everyone says it is about time I sign up for a marathon.

I usually like to dedicate my training and racing to someone. When you dedicate a race to someone it gives you the motivation to finish. I am dedicating my first marathon, the Ascension Seton Austin Marathon, to my wife. Veronica  is my biggest supporter. She always waves to me or blows a kiss when I am on a training run. My wife even goes to every running expo with me. She knows exactly where I am on any given racecourse and pops up to say “Hi!” on any given street corner. Veronica knows my running so much that she know what foods I need to eat during training and what gear I should wear based on the weather and the distance.

My wife has been through a lot recently. Her favorite cousin recently passed away from a drowning accident in Port Aransas. Prior to that, her uncle passed away. My wife helped coordinate her uncle’s funeral and the music, no questions asked.

Running with a heavy heart

This year I am running with a heavy heart, but still staying positive about my training. I like to keep loved ones on my mind and dedicate miles to them during the race. My overall training has been going well. I am following a racing plan and definitely have been enjoying my long runs. Running is contagious. I have several coworkers that have started running and have already signed up for races. They say that I turned them into runners. Maybe I have turned them into runners because I am always talking about it and I am always happy to answer any running-related questions.

My Running Story is a series of blog submissions from runners just like yourself. They submitted their inspirational running stories as part of a contest to win an entry of their choice to the 2020 Ascension Seton Austin Marathon. Their stories range from crossing their first finish line to drastic lifestyle change due to running. Everyone’s story is different and unique, impacting them in a specific way. While each story is specific to the author, everyone can resonate in some form or fashion because of the power of running. Other My Running Story submissions include Kayleigh Williamson, Kirsten Pasha, Michael Coffey, Samantha Santos, Tom Hamann, Erica Richart, Angela Clark, Rebecca Galvan, Jeremy Tavares, Axel Reissnecker, Blair Nagel, and Brittany Drennan.

There isn’t a correct way or right time to begin running. Everyone’s journey is different. Some start at a young age while others transition from a different sport. Some start later in life while others return after a lengthy injury. Unbeknownst to Blair Nagel, she broke her back in the seventh grade. But she didn’t realize it until eight years later (sounds like a runner already!). Read her edition of My Running Story, see how running became her new routine, and follow her journey back to full health! 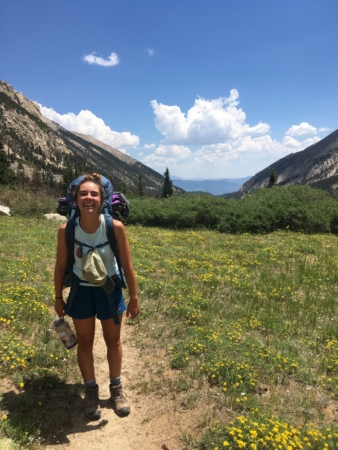 Running was the only workout that didn’t aggravate back pain

February 2019 was marked by many things, most prominently inexplicable back pain. Here’s the thing, I’m a 21-year-old lifelong athlete and suddenly I couldn’t drive a car more than ten minutes down Lamar Blvd. How was I going to make it through the upcoming summer of backpack guiding in Colorado? Running became the only form of working out that seemed to make my body and back stronger, rather than ache. So, it became my new routine.

I grew up playing year-round volleyball. As long as I can remember, it was three or more hours of play a day. School ball in the fall, club in the winter and spring, beach in the summer. I’ve always loved the intensity of the game. I was in shape to sprint and jump – not to run long distances. So running and I have never quite been friends, barely even acquaintances on conditioning day. Then one day in the seventh grade, amidst all this training, I felt a sharp pain in my back for the first time ever. After a few months of physical therapy, I was back up and running, but things were never quite the same.

Eight years of my stubborn nature later, I had let my lower back pain persist to the point that some nights I’d end up laying on the floor. Sitting to finish an essay for class was too painful. I have friends in my life who decided it was time for me to overcome my strong will and see a spine doctor. All hopes and prayers begged for clarity because this didn’t add up.

My back has been broken since seventh grade

Within seconds of looking at my x-ray, my doctor exclaimed, “Oh! Your back is broken! But don’t worry — it’s better than a fracture. No surgery needed. L5-S1 Isthmic Spondylolisthesis.” Essentially, my lowest vertebrae and sacrum are no longer connected by bone, only resting on my disc. My strong muscles compensated for the break since it occurred in seventh grade, until 2019, when my focus turned more to school and extracurriculars rather than fitness.

Not only did running become the new routine, it became a form of medicine. A safe place of healing. Training for the 2020 Austin Half Marathon is a journey back to health and a journey out of pain and stubbornness and into one of joy and overcoming.

My Running Story is a series of blog submissions from runners just like yourself. They submitted their inspirational running stories as part of a contest to win an entry of their choice to the 2020 Ascension Seton Austin Marathon. Their stories range from crossing their first finish line to drastic lifestyle change due to running. Everyone’s story is different and unique, impacting them in a specific way. While each story is specific to the author, everyone can resonate in some form or fashion because of the power of running. Other My Running Story submissions include Kayleigh Williamson, Kirsten Pasha, Michael Coffey, Samantha Santos, Tom Hamann, Erica Richart, Angela Clark, Rebecca Galvan, Jeremy Tavares, and Axel Reissnecker.

FREE 12-week 26.2-mile training plan to get you ready for Austin Marathon

Professional triathlete and coach Paul “Barny” Matthews constructed a free 12-week marathon training plan for 2020. Don’t worry, the plan will still get you ready for the 2021 Ascension Seton Austin Marathon presented by Under Armour on February 14th! Whether you want to set a new PR or complete your first marathon, download this 26.2-mile training plan and toe the start line with confidence. Barny is the coach of Heather Lieberg, 2019 Austin Marathon female champ (2:42:27) and 2020 Olympic Marathon Trials qualifier.

Are you running the Austin Half Marathon? Download Barny’s free half marathon training plan!

This downloadable plan is geared for runners who want to complete their first marathon or set a new PR. You can customize this training plan yourself by adjusting the specific workouts and their days to fit your busy life.

Enter your email to download the Austin Marathon training plan! 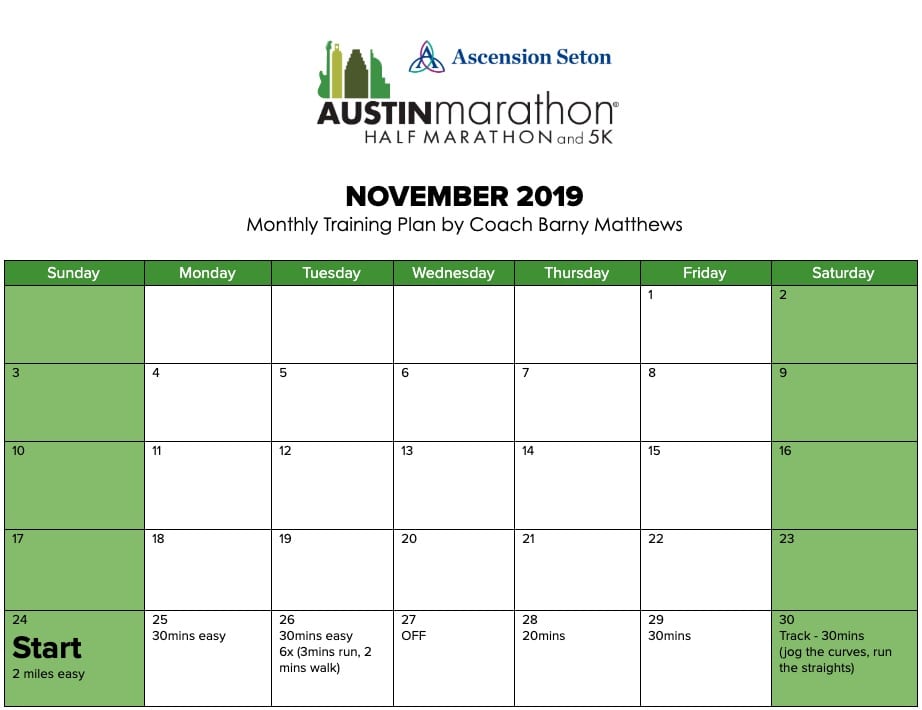 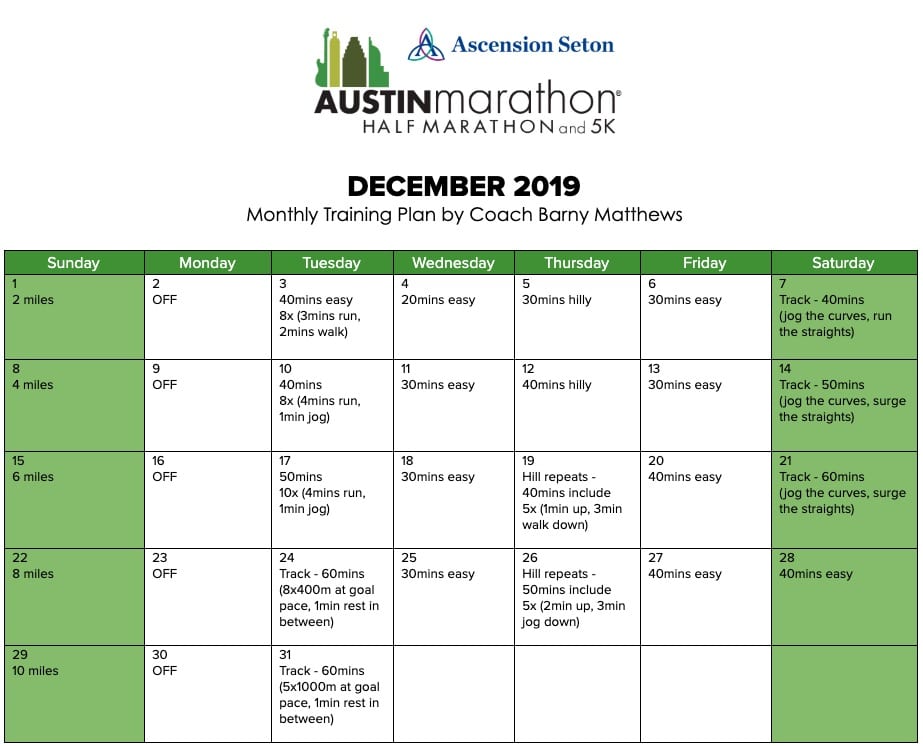 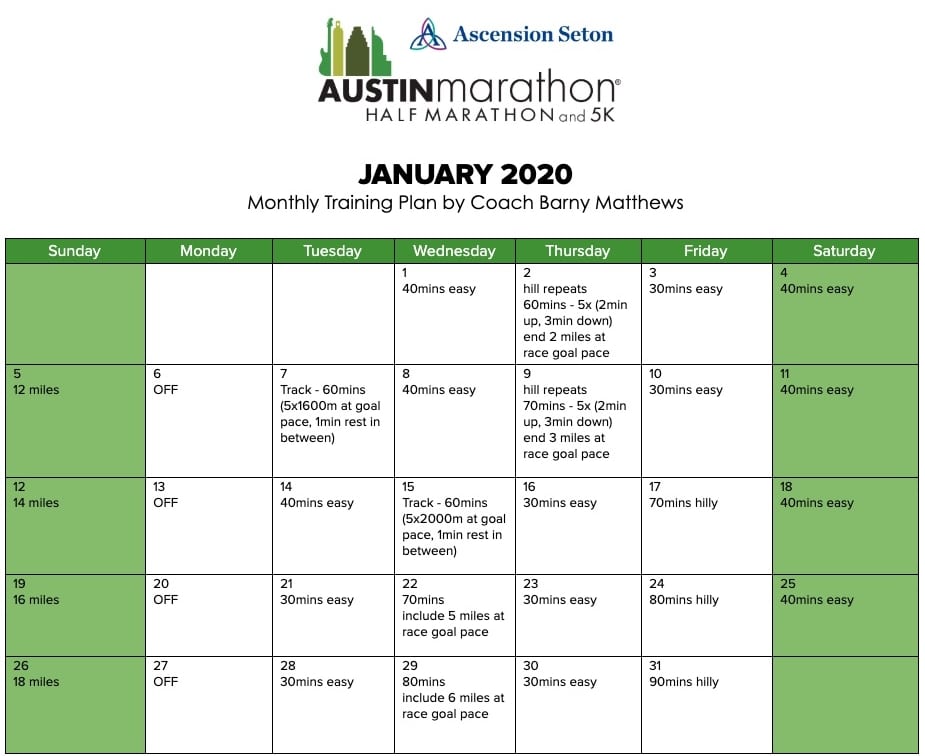 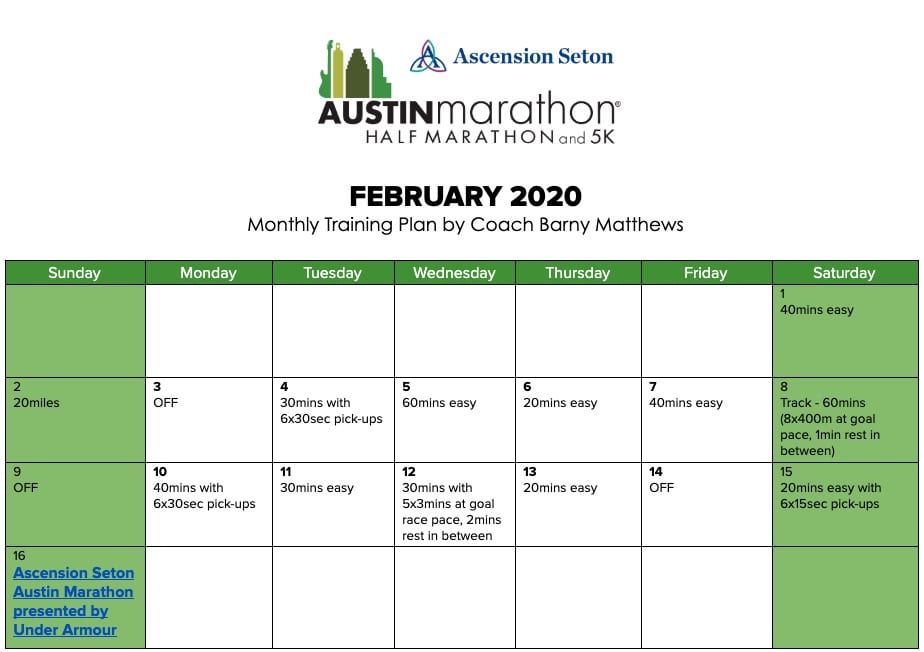