“It was an honor to begin the Austin Marathon in last place and help Austin Gives Miles surpass their $1 million fundraising goal,” said Armstrong. “Austin holds a special place in my heart and I’m fortunate that this opportunity allowed me to positively impact so many amazing Central Texas nonprofits.”

As Charity Chaser, Armstrong finished the Austin Marathon in 3:02:13

Lance Armstrong was the final participant to cross the Austin Marathon start line. He earned money for 28 Central Texas nonprofits for every marathoner he passed. Armstrong began 22 minutes after the ringing of the start gong. He finished in 3:02:13 and passed all but 59 marathoners. Armstrong’s efforts have pushed Austin Gives Miles past their $1 million fundraising goal. Rewatch his podcast about preparing for the Austin Marathon and learn about his approach to being Charity Chaser.

“Lance has done a tremendous job in his role as Charity Chaser, taking the Austin Gives Miles program to another level,” said Jack Murray, co-owner of High Five Events. “We’re proud to surpass the $1 million fundraising goal and are excited to see how much further it will increase.”

Armstrong is a philanthropist, cyclist, and an avid runner. He is founder and owner of WEDŪ, a content destination designed to provoke and equip people to embody an endurance lifestyle. Armstrong hosts two podcasts: The Forward, which features down to earth conversations between Armstrong and a myriad of personalities; and THEMOVE which offers listeners a rare, insider’s perspective on the world’s most iconic cycling races. WEDŪ also produces endurance cycling events Texas HŪNDRED and Aspen FIFTY.

The Austin Marathon will celebrate its 29th year running in the capital of Texas on Feb. 16, 2020. Austin’s flagship running event annually attracts runners from all 50 states and 35+ countries around the world. Having start and finish locations in the heart of downtown Austin puts participants and spectators near all the action and within walking distance of restaurants, hotels, and shops. Finishing with the picturesque Texas State Capitol as your backdrop is icing on the cake for the perfect running weekend destination. Registration is currently open and best pricing ends on Thursday, Feb. 28th. 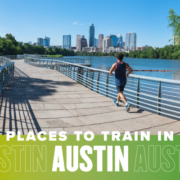