High Five Events announces Fleet Feet Austin as their Official Running Store and Merchandise Partner. The partnership will focus on management of all event-related Under Armour gear and expanding community engagement opportunities.

“We’re excited for the opportunity to support and grow Austin’s active community alongside High Five Events,” said Ari Perez, Fleet Feet Austin’s Operating Partner. “Their lineup of premier events, level of community involvement, and record of philanthropy fall in congruence with Fleet Feet’s ongoing efforts in Austin and beyond.”

Fleet Feet Austin will have an increased expo presence at the Ascension Seton Austin Marathon presented by Under Armour and 3M Half Marathon presented by Under Armour. Additionally, they’ll manage the expanded Merchandise Zones that will sell official Under Armour gear. Fleet Feet Austin opened in July of 2018 and made themselves well-known through their positive impact on Austin’s running and fitness community. This partnership includes other events in High Five Events’ portfolio: Manzano Mile presented by Dole, Rookie Triathlon, Jack’s Generic Triathlon, and Kerrville Triathlon Festival.

“The support Fleet Feet Austin has shown Austin’s endurance community directly aligns with High Five Events’ goals and mission,” Jack Murray, co-owner of High Five Events. “By working together we will continue to better the community that we’re a part of and that we serve.”

The Austin Marathon will celebrate its 28th year running in the capital of Texas on February 17th. Austin’s flagship running event annually attracts runners from all 50 states and 30+ countries around the world. Having start and finish locations in the heart of downtown Austin puts participants and spectators near all the action and within walking distance of restaurants, hotels, and shops. Registration is open for all distances.

The 3M Half Marathon boasts one of the fastest 13.1-mile courses in the country. It will celebrate its 25th year running on January 20th. Runners will enjoy a point-to-point course with mostly downhill running that showcases some of Austin’s finest locations. Starting in north Austin and finishing near the Texas State Capitol, runners will appreciate a 300+’ net elevation drop. Registration is currently open. 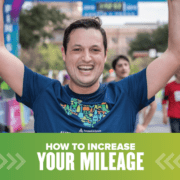 Increase Your Mileage with this Helpful Advice