The Austin Marathon presented by Under Armour is proud to be named a 2018 Champion of Economic Impact in Sports tourism by Sports Destination Management. The Austin Marathon, produced by High Five Events, one of the largest privately owned event production companies in the United States, injected $37.5 million into the Austin economy during race weekend, a $3.1 million (8 percent) increase from 2017. High Five Events partnered with the expert faculty at St. Edward’s University’s Bill Munday School of Business to calculate the findings.

“The Austin Marathon’s annual multi-million dollar economic impact benefits Austin and stimulates our local economy,” said Austin Mayor Steve Adler. “We’re proud to host one of the country’s top marathons, one that annually attracts runners from all 50 states and more than 30 countries. More runners are realizing there’s no better city to recover in!”

Other large-market champions include 2018 NCAA Final Four, 2018 NFL Draft, and The Honda Classic. Sports Destination Management is the leading publication with the largest circulation of sports event planners and tournament directors in the sports tourism market. They announced the 2018 Champions of Economic Impact in Sports Tourism in a special feature in their November/December issue. This year’s winners are responsible for contributing more than $700 million to the national economy over the past year.

Austin Marathon contributed $37.5 million to the Austin economy in 2018

“The Austin Marathon is an excellent example of a sports event that showcases the City of Austin and offers multiple options that appeal to everyone, from the veteran endurance runner to the person who is dipping a toe into the waters of racing for the first time,” Mary Helen Sprecher, Managing Editor, Sports Destination Management. “The fact that this event has such a positive economic impact only reinforces the value of these events to the city and to the greater fitness community as a whole.” 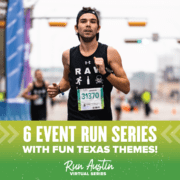