On Sunday, April 25th, the Ascension Seton Austin Half Marathon presented by Under Armour signaled Austin’s successful return to running. Nearly 5400 registered for the Austin Half Marathon or KXAN Simple Health 5K benefitting Paramount Theatre. Austin’s successful return to running was highlighted by first-time runners, costumes, countless smiles, and an energetic atmosphere. Participants have been training for months, including decorated Texas Longhorn athletes Leo Manzano and Nate Boyer. Even though the 3-block-long finish line festival was left out this year due to the Mitigation Plan, finishers were encouraged to celebrate at one of the dozens of Austin restaurants and bars that provided deals and discounts for the virtual goodie bag. 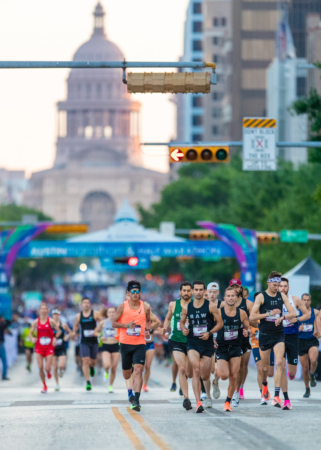 “The Austin Half was my first race in 12 years and I couldn’t have asked for a better event to bring me back into running,” said Jack McBee, who finished in 2:06:32. “The energy was incredible — clearly everyone was ready to get back to running Austin! I’m sure I speak for most runners today when I say kudos to the Austin Marathon team for making this an unforgettable experience!”

Temperatures began in the mid-50s. The rest of race day was picturesque, without a cloud in the sky. Twelve local bands performed on the 13.1-mile course, giving participants a taste of The Live Music Capital of the World. Social media confirmed participants were blown away by their goodie bags which included a custom Under Armour shirt, pint glass, bandana, sunglasses, and more. Finishers received a virtual goodie bag that includes exclusive deals at more than 30 sponsors, partners, and local Austin businesses.

“After the year we’ve had I’m so grateful I ran with the Austin running community today,” said Andrea Mee, who’s celebrating finishing her third Austin Half Marathon in a row at Star Bar. “The Austin Half Marathon is hands down one of the best races I’ve ever done and I’m so thankful they were able to host it today!” 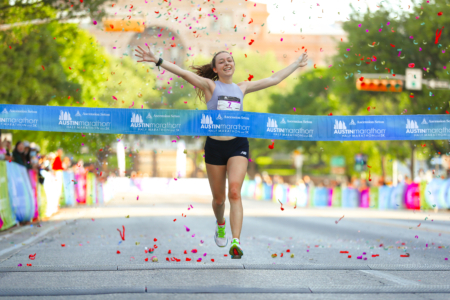 “After so many canceled races it felt great to toe the Austin Half Marathon start line,” said Murray, who says she earned her first major victory. “This was an experience I will never forget and I’m thankful that race organizers went above and beyond in making today as safe as possible!” 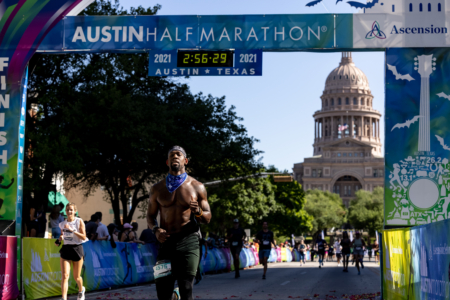 “This was an absolutely incredible day and experience, especially considering I nearly beat my friend and Olympic silver medalist Leo Manzano,” said Nate Boyer, who helped raise more than $20,000 for Dell Children’s. “I’ll never forget how the running community came together at the Austin Half Marathon to mark Austin’s successful return to running. Training begins to get my revenge against Leo in 2022!”

Registration is open for the Austin Marathon’s extended 30th anniversary, scheduled for February 20, 2022. Special pricing is set at $119 for the marathon, $99 for the half marathon, and $49 for the KXAN Simple Health 5K. These amazing deals will be available for a limited time only. Don’t miss your chance to Run Austin, the #1 city in America. 2021 participants can see their results on the Austin Marathon website and continue to share their memorable experiences on Facebook, Twitter, and Instagram. Runners can expect their FinisherPix race day photos to be ready in 24-48 hours after the race. 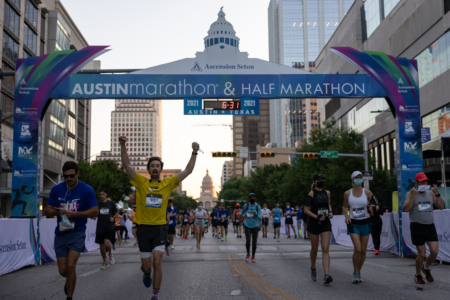 “I just know that Austin’s successful return to running today is going to springboard into an even more amazing experience at the Austin Marathon’s 30th anniversary in 2022,” said Manzano, Austin Marathon Celebrity Race Ambassador. “The running community is a special one, and to see them come together and support one another, local businesses, and nonprofits after months of training truly exemplifies how amazing this community is.”

Excitement is brewing for Austin’s return to running

The Ascension Seton Austin Half Marathon presented by Under Armour is putting the final touches on Austin’s return to running. This year’s event was postponed from its original date of February 14th. Formal approval was issued by the City of Austin on March 23rd for the Austin Half Marathon and KXAN Simple Health 5K benefitting Paramount Theatre. Austin’s return to running will feature more than 5300 runners, overflowing goodie bags, live music, and a Mitigation Plan. The Austin Half Marathon, owned and produced by High Five Events, will take place on April 25, 2021.

“The return of the Ascension Seton Austin Half Marathon and 5K is extremely important to our city and a great start to bringing back large-scale sports events,” said Drew Hays, Director of the Austin Sports Commission. “The Austin Marathon was one of the last events held in 2020 and now one of the first to return in 2021 and we are excited to welcome athletes to Austin.”

The Austin Half Marathon course will feature 12 local bands who will perform live music on the 13.1-mile course, giving participants a taste of The Live Music Capital of the World. In-person participant goodie bags will feature custom swag including an Under Armour shirt, pint glass, bandana, sunglasses, and more. In addition, each participant will be emailed a virtual goodie bag. It will include exclusive deals from sponsors, partners, and local Austin businesses.

“The Austin Marathon has positively impacted Austin in so many different ways for many years,” said Jack Murray, co-owner of High Five Events. “We’ve worked tirelessly to bring this year’s event to life and we’re excited to produce the Austin Half Marathon and 5K alongside our many partners, sponsors, and the City of Austin.”

High Five Events and their sponsors and partners like Ascension Seton, Austin Public Health, and the City of Austin are all fully committed to the Mitigation Plan. The full COVID-19 Mitigation Plan is available to view and includes: